Nobody can quite figure out why Boston-based rockers New England didn’t become massively successful back in the late ‘70s and early ‘80s. They had it all – the sound, the songs, the looks, the musicianship, the right producers (Mike Stone, Todd Rundgren, Paul Stanley), major label support, etc. For some reason, it just never happened. On the other hand, New England never quite fit comfortably into any genre. With early support from KISS’ Gene Simmons and Paul Stanley, NE wasn’t exactly KISS proteges, musically or visually. Touted as a Hard Rock band, New England was far more melodic than 90% of their Rock contemporaries. Their melodic hooks were tailored made for the Power Pop kids but the band rocked a little too hard to share bills with 20/20 and The Knack. Obviously, New England had EVERYTHING going for them… except a good marketing angle. Sadly, a band that ignored the rules of the game were ultimately doomed to sit on the sidelines while lesser players made it all the way to MTV. The irony is that, 37 years after their split, people are still talking about New England while a majority of the bands that became more successful are long-forgotten.


What made New England so special? Imagine a blend of ELO-like melodies, the sonic AOR landscape of Boston (the band), the Pomp-Rock leanings of Queen, the Power Pop chime of Shoes, and the boundless energy of Cheap Trick and you’ve got a general idea of where they were coming from. But New England was more than just a band that you compared to other bands – they were their own beast. While they didn’t become multi-platinum-selling artists, all was not completely lost, though. They did manage to score a U.S. Top 40 hit with “Don’t Ever Wanna Lose Ya” in 1979 but their three albums – NEW ENGLAND (1979), EXPLORER SUITE (1980), and WALKING WILD (1981) – didn’t do the business they should have and the band called it quits in ’82. 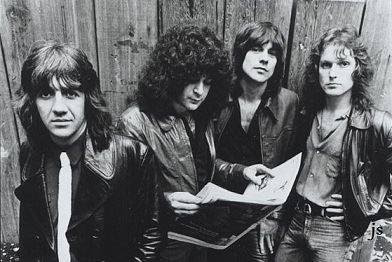 The quartet – John Fannon (guitar/vocals), Jimmy Waldo (keyboards/vocals), Hirsh Gardner (drums/vocals), and Gary Shea (bass) – is now being celebrated with HNE/Cherry Red’s THE NEW ENGLAND ARCHIVES BOX: VOL. 1, a five CD set that reveals a different side to the band not heard on their trio of officially released albums. Consisting of early versions, demos, rough mixes, and previously unreleased recordings, this set serves as a proper introduction to the band as well as a great release for collectors.

Disc One, EARMARK STUDIOS, PHILADELPHIA 1978, features tracks recorded prior to the band’s record deal. Previously released as 1978 (GB Music), this set features energetic and inspired versions of songs that would eventually end up on their debut. For collectors, there are three songs that the band never released (until GB Music issued them in in 1998). The versions of old favorites sound fresh and exciting all of these years later. Listeners may be more familiar with the album versions but there’s no denying that these versions are every bit their equal. And “Candy”, “I Will Be There”, and “Even When I’m Away” are just as good as anything the band released during their short career.

Disc Two doesn’t match the sonic quality of Disc One’s recordings but is a fascinating peak into the band’s history. BLIZZARD TAPE, NEW ENGLAND 1978 was recorded during a bad blizzard, yet the band sounds white hot and full of vim and vigor. One thing that is immediately apparent is that the band had their own musical vision and perfected their sound even before going into the studio with Mike Stone to record their debut album. Again featuring songs they never properly recorded, these sessions capture a band filled with confidence and hope. EARMARK STUDIOS, PHILADELPHIA 1978 includes more demos of tracks that would make the first album. Some might say that numerous versions of the same songs might be overkill but if you are a New England fan, these slightly different takes are definitely worth your while. Again, featuring songs that never made proper albums, this is an essential listen. The disc ends with a 1975 recording of a song called “Familiar Faces”, proving that Fannon had a distinct musical vision long before NE and stuck with it.

Disc Three contains rough mixes of tracks from their self-titled debut album. More than just alternate mixes, these tapes offer an early glimpse of that debut album. While some of the songs are missing overdubs, they are mixed differently, allowing certain elements to jump out – Waldo’s atmospheric keyboard work sounds more prominent in some of these mixes. Yet again, another fascinating spin on that classic debut album.

Disc Four, INTERMEDIA ROUGH MIX, begins with rough mixes of tracks from their second album, EXPLORER SUITE. Their sophomore album was even more eclectic, sounding not unlike Power Pop icons Shoes if they had been influenced by Journey and Styx. And yes, that is a glowing endorsement! Fannon’s songwriting was on par with the cats from Shoes as well as Jeff Lynne, Rick Nielsen, and other melodic-minded rockers. And when he occasionally kicked into falsetto, his only contemporary rival was Donnie Iris. With songs like “Conversation”, “Searchin’”, “Honey Money”, and “Hey, You’re On The Run”, this set features some of the band’s finest material. Or maybe it is more accurate to say that EXPLORER SUITE contained some of the band’s finest material… but if you don’t own that, then this will most certainly satisfy your melodic needs. The last seven tracks on this disc are demos by the pre-New England band Target. Yet again, proof that the guys in New England were way ahead of their time and should be looked upon as Pop Rock prophets.

Disc Five is the most frustrating CD of the set. Comprised of demos of songs that might have made their fourth album had they stayed together, it reveals a band still full of promise and ideas. While the recordings aren’t the highest quality, what comes through is the song and if you haven’t realized by now, the ‘song’ is the most important part of New England’s recorded legacy. They all may be extremely talented musicians but when they came together, those talents were able to spin audio gold. “Angel”, “Back On The Streets Again”, “Love Never Stops”, “Marlena I’m Not Crying”, and especially “I’m In The Middle” are amazing gems that need to be re-recorded by the band and unleashed upon the masses. Then again, will New England finally be appreciated by a larger audience all of these years later? Well, what should happen and what will probably happen are two different things.

Once you get this release into your hands (along with the band’s three studio releases), you’ll understand why people still talk about the band New England. 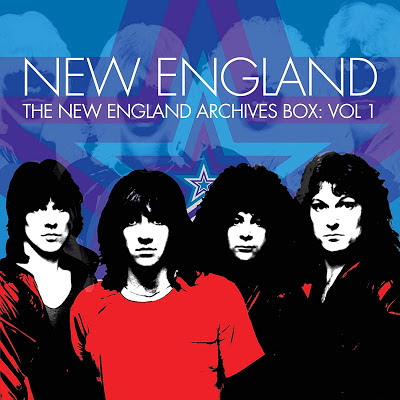