Celebrating their 25th Anniversary this year, California-based label Hopeless Records has been at the forefront of the modern Punk movement since their inception in 1994. With a host of Pop Punk, Hardcore, and Post-Punk acts on their roster, the label has been one of the most influential on the scene. With releases by All Time Low, Sum 41, Neck Deep, Avenged Sevenfold, Thrice, Yellowcard, Anarbor, Taking Back Sunday, Silverstein, We Are The In Crowd, Bayside, The Used, The Wonder Years, The Human Abstract and Enter Shikari, Hopeless has always embraced the energy of modern Punk and releasing albums that have helped shape the genre. Through it all, the label has earned the respect of the Punk Pop/Emo kids and that is what is most important.


One of Hopeless’ latest signings is Houston, Texas-based Alt-Rock/Punk Pop band Waterparks. Featuring lead vocalist/rhythm guitarist Awsten Knight, lead guitarist/backing vocalist Geoff Wigington, and drummer Otto Wood, Waterparks continue to build their audience with each release. Initially a quartet, the band has continued as a trio since the departure of their original bassist, using a rotation of sidemen and friends to fill in for live shows. They released their first EP, AIRPLANE CONVERSATIONS, in 2012, followed by another EP, BLACK LIGHT, two years later. Their third EP, CLUSTER, was followed by their debut full length, DOUBLE DARE, both released in 2016. Their sophomore album, ENTERTAINMENT, was released in early 2018. They then signed to Hopeless Records and are finally issuing their third full length release nearly 16 months after their last album…

FANDOM is everything you’re looking for in a WATERPARKS album. It is aggressive and sweet, loud and melodic, anthemic and intimate. With powerhouse chords, playful arrangements, and hooks that will have you wiggling like a sturgeon on the end of a fishing line. Humorous, personal, and musically varied, FANDOM is an album that incorporates Punk Pop, Hip Hop, Soul, Rock, Punk, and commercial Pop. Oh, and if you are fan of the ‘F’ word, you’ll be giddy with glee.  And no, ‘F’ doesn’t necessarily stand for FANDOM in this case… From opening track “Cherry Red” to album closer “I Felt Younger When We Met,” Waterparks take you on a musical journey filled with unexpected twists and turns…  Perhaps it is time for you to join in the fun with Waterparks? 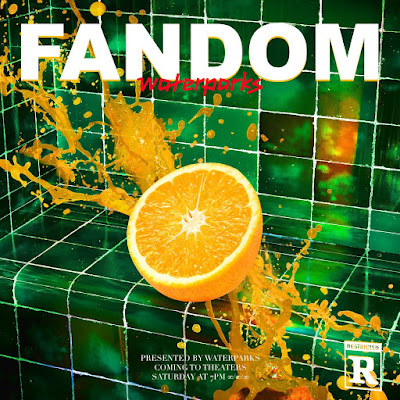