AMPED™ FEATURED ALBUM OF THE WEEK: CHRIS BUTLER/GOT IT TOGEHTER!

Even though you might not recognize his name, you are more than likely familiar with the work of Chris Butler. While his studio work with Tin Huey, Richard Lloyd, the dBs and other bands might have passed some of you by, you will most certainly recognize his higher profile recordings with The Waitresses. Chris Butler was the guitarist and songwriter for the Akron, Ohio-based quirky New Wave outfit and was responsible for penning their hit single “I Know What Boys Like,” as well as their theme song to the cult TV series Square Pegs and the perennial holiday favorite “Christmas Wrapping.” What some may not realize is that while his most high-profile band may have split in 1984, Chris Butler has continued to create experimental music that is entirely unique and charmingly quirky.

Akron, Ohio is the birthplace to some of Rock music’s most inventive outfits including Devo and The Bizarros (Cleveland’s Pere Ubu easily fits into the same musical mold). Each of these bands used Rock’s fundamental basics as a jumping off point but turned it all upside down and inside out. There was obviously something in the water because Butler’s music occupies the same head space as those bands. Over the years, he has written and recorded music that challenges the listener, defies logic, and sounds remarkably fresh after repeated listenings. It is as if the music changes shape with each spin – once your brain settles on the song’s hook, you discover a new layer and that song suddenly becomes fresh again.

GOT IT TOGEHTER! is a wonderful tour-de-force that was recorded almost entirely by Chris with some help from his friends. His first studio album since 2014’s EASY LIFE, this collection of songs offers up more creative ideas than some bands can muster in an entire career. Never content to work in one arena, the album is all over the map yet doesn’t sound haphazard or unfocused. GOT IT TOGEHTER! isn’t so much a musical statement as it is a collection of musical journeys. “Physics,” “Songs For Guys,” and “New Enemy” open the album yet sound like three different bands vying for the album’s lead-in position and settling their differences down the pub. And it just continues from there: “Late For Work,” “Better Than I Ever Was,” “Nicotine Weather,” and “Summer Money” are songs that may need a few listens to sink in but when they do, you’ll discover something new each time! GOT IT TOGEHTER! is as kooky as it is wonderful and comfortably fits into Butler’s back catalog. 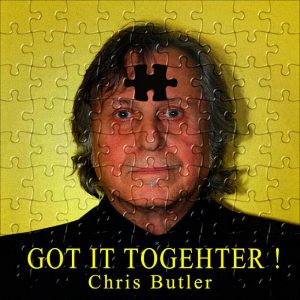