AMPED™ FEATURED ALBUM OF THE WEEK: EXO/DON’T MESS UP MY TEMPO

K-Pop is one of the most popular genres in music today. And if you have no idea what K-Pop is, you really haven’t been paying attention. In a nutshell, K-Pop – an abbreviation of Korean Pop – originated two decades ago in South Korea and combines smooth R&B, sparkling Dance Music, pulsating Electro and shimmering Pop into one perfectly produced package. While the K-Pop landscape is littered with both male and female artists, boy bands dominate the genre. While artists like N*Sync, Backstreet Boys and One Direction kept the U.S. market interested over the past two decades, K-Pop’s popularity began to rise. In the last few years, K-Pop has infiltrated the U.S. market and bands like BTS and Super Junior have taken the charts by storm. One of the most beloved and respected K-Pop groups today is EXO, an eight member Korean-Chinese group that features the multi-million selling solo artist Lay as a core member. Lay is making his EXO return on DON’T MESS UP MY TEMPO after two years on his own. 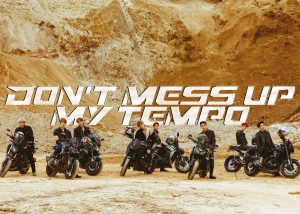 DON’T MESS UP MY TEMPO is the band’s fifth album and continues their tradition of offering up fresh slices of modern K-Pop that showcases each of the members’ strengths. While their live shows are extravagant affairs, the group’s strength lies in the material. Although the music is aimed at a younger demographic, it is sophisticated and catchy enough to appeal to music lovers of all ages. From The Monkees in the ‘60s, The Osmonds and Jackson 5 in the ‘70s, New Kids On The Block in the ‘80s and the aforementioned N*Sync and One Direction, this is music that reminds the listeners that we are all connected in some way, shape or form. Kids, parents, neighbors and strangers are suddenly brought together to celebrate music and love. And the music of EXO certainly fits that bill.

DON’T MESS UP MY TEMPO features tracks produced and/or written by British duo LDN NOISE, production team The Underdogs, American production team MARZ Music, hit maker Kenzie, and rising star Bazzi alongside other lyricists and songwriters. Tracks like “Tempo,” “Gravity,” “24/7,” and “Sign” are crowd-pleasers. The songs are sung in Korean, Chinese, and English. However, even if you don’t understand the lyrics, the group’s joy of making music translates into a great time regardless of the language barrier. So, clear the furniture out of the room, turn on the party lights and hit play because DON’T MESS UP MY TEMPO is a party waiting to happen!

(DON’T MESS UP MY TEMPO is available in three versions: Allegro, Moderato, and Andante, named after different types of tempos.) 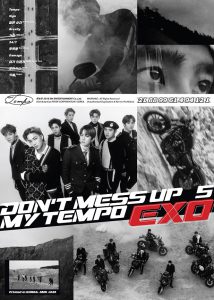 DON’T MESS UP MY TEMPO