KING/Remixes & Rarities reviewed by THE CHANCELLOR!

During the ‘80s, it seemed like you had to have a gimmick or make a unique fashion statement in order to attract the attention of Pop Music fans. Videos and TV performances were just as important as radio play and no matter how great your song was, if you didn’t stand out in a sea of Pop wannabes, you were very rarely noticed. However, once you grabbed everyone’s attention, you had to have the songs and talent to keep their attention. Pop quartet King may have had a short shelf life but they actually had more than enough talent to keep it going had they been given the chance to.  With Paul King’s soulful voice, colorful outfits and fancy Doc Martens footwear, King (the band) released a pair of albums in a chart career that lasted merely two years, but their talents ensured that they are still remembered today. Not quite Synthpop, Rock or Soul, King combined a few different genres and ended up sounding like… King!

“Love And Pride” and “Won’t You Hold My Hand Now” were two big singles from their 1984 debut album STEPS IN TIME that actually received plenty of airplay on Alternative/New Wave radio stations like KROQ in L.A. The videos for each of those tracks were in rotation on MTV as well, so the band certainly began building a large following in the States, although it didn’t equal their massive success in the UK and elsewhere. The album itself was a fine platter with plenty of good songs and a distinct sound that managed to become part of the New Wave movement while also standing apart from it. Their second album, BITTERSWEET (1985), was much better. Still sounding as unique as their debut, the songwriting on this sophomore release was much more advanced than their quirky approach to Pop that peppered their debut. Tracks like “The Taste Of Your Tears,” “Torture,” and “Alone Without You” are just as great as their charting singles. The album itself is chock full of great Pop nuggets. Sadly, before King could take their sound to yet another level, the band split up and Paul King went solo. 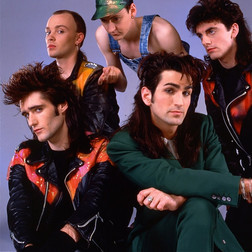 Gone but not forgotten, Cherry Pop/Cherry Red Records has just issued the glamorous REMIXES & RARITIES, a two CD set that compiles exactly what the title suggests.  Essentially a collection of non-LP tracks – including extended mixes, single edits, live tracks, and b-sides – REMIXES & RARITIES serves as an excellent alternate overview of the band’s career. Some of these recordings ended up as bonus tracks on CD reissues of their two albums but there’s no reason to avoid this disc if you have both of those. All the tracks listed above are present and accounted for (in remixed form) while the live tracks from various singles showcase the band’s live energy. While some tracks appear here in numerous different mixes, it is nice to be able to listen to each of them with fresh ears since the remixes give approach each track from different angles. Fans old and new can rejoice because the crown has been returned to the King!