Steel Panther’s LOWER THE BAR
is the Heavy Metal equivalent to
Beyonce’s LEMONADE: 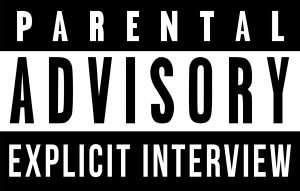 BEAU: The album is just about to be released. How are you feeling about it and the reaction so far?
STIX: We’re really excited. We feel like this collection of tunes is really strong. We’re really stoked about it. Releasing “She’s Tight” (Cheap Trick cover) was almost like an accident and we didn’t know it was going to end up being a single. We didn’t want to put out a cover song out as a single! So, having gone through that experience, for our next single – “Anything Goes” – we wanted something rocking right out of the gate. We wanted to let our fans know it was not an album of covers – we’re doing Steel Panther stuff and here’s what you’re going to get. And then with “Poontang Boomerang,” the video treatment was so funny to us. Anytime you can have a kitten turn into a boomerang, you HAVE to do that video. The reaction that we’ve gotten to it is fantastic. And just knowing what songs are on the record and knowing what people haven’t even experienced yet, I’m just giddy. I can’t wait to hear what people connect with, whether its “Now The Fun Starts” or “Pussy Ain’t Free.” I feel like there’s songs for everybody on this record!

BEAU: The album has a bunch of great songs with hooks bigger than Moby’s dick but are you concerned that the heart-tugging lyrics might distract from the great musicianship and dynamics of the band?
STIX: No, I think our musicianship, dynamics and good looks are enough to overpower any heart-tugging lyrics. For us, it’s Heavy Metal – it should be fun and it should rock. But also, we’re really trying to send messages. For instance, in “Pussy Ain’t Free,” if there’s a guy out there and he meets a chick and he’s about to move in with her, we’re here to remind him that pussy is never free. If you go out and get a hooker, that’s one thing. But if you’re trying to get a girlfriend, you’re buying her dinner, paying rent, buying things for her… NOTHING is ever free. Except for streaming music.

BEAU: Did you approach writing and recording this album differently than your previous releases? By my calculations, you use the word ‘balls’ 8% fewer times than on any previous album.
STIX: Was there 8% less ‘balls’ on this record? No, it wasn’t our intention to go more mainstream on this release. For us, it’s all about what turns us on at the time of the writing… what is making us happy. Whether that is more balls, less balls, more titties, more pussy… It’s an in-the-moment kind of thing. We try put together the song based on the vibe. We’ve had people ask us, “Don’t you think that people are going to get tired of you guys sing about pussy or drugs?” Well, let’s look at Taylor Swift or Adele, who are “serious artists.” If we mapped out their songs, how many songs would they have about love? How many songs about breaking up? When you’re a band like Steel Panther and you sing so directly about stuff, people go, “That’s that band that sings about pussy and drugs!” But if you did the same litmus test for those mainstream artists, they’d probably only be singing about one or two subjects, max.
BEAU: I’d like to hear Taylor Swift tackle the same subject matter as Steel Panther…
STIX: How fucking cool would that be? If she had a song called “Sucking Dicks and Smoking Weed,” you’re telling me that wouldn’t be the biggest single in the world? I’m telling you, dude. I have a mind for these things and I have an eye for smash hits! If she sang that song, it would be everywhere! If she didn’t stream it and you could only get it if you paid 99 cents, I would buy it.
BEAU: I’d go as high as $1.19.
STIX: Honestly, dude, not even kidding – I would pay $1.99 for that single just to have it!

BEAU: Do you find it satisfying to create these new fucking killer tracks while staying true to all the great Glam Metal that inspired you?
STIX: I know a lot of musicians that are trying to write songs in whatever style is popular. And record companies are always following the trends. Whereas Steel Panther is like a boat that is on course and we’re not fucking veering off to try to get with the other boats. We’ve been fortunate enough to make a career out of charting our own course. There is a big satisfaction in not caring about what is current and being able to say what it is we want to say. We’ve been able to create this for ourselves. It is very satisfying to not worry about all that trendy shit.

BEAU: Does it annoy you when people refer to you as a comedy band?
STIX: When we first came out, I think it bothered me a little because I wanted to be a Heavy Metal band. But honestly, whatever people want to label it as, it doesn’t really matter to me. If we end up in a rock category, heavy metal category or comedy category, as long as we’re able to put records out that we love and go rock and play shows, I love being part of that.

BEAU: Do you find it strange that when you first started the band, you were covering songs by artists that played Donington… and now you are playing the Download Festival at Donington with your original material?
STIX: Yeah! It’s very surreal. It’s not a typical course that bands take in order to achieve their goals. We’ve been able to create this as we went along. We’ve never had a master plan. We worked really hard – played five nights a week – and got good at what we do. We’ve been very fortunate.

BEAU: The thing that really makes Steel Panther work is that you write fucking great songs. Musical spoofs like Spinal Tap or The Rutles would never have worked if they didn’t have great songs.
STIX: I agree. At the end of the day, if Steel Panther’s first record had been an album of complete mediocrity then there’d be no career. It would have come out and fallen flat and that would have been that. Same with the second and third record. If you put out something that people don’t care about, song-wise, then its over. Nobody’s going to say, “Oh my God… but they are so good looking!” Let’s take a boyband like The Jonas Brothers – their career only lasted for three years. From when their fans were 13 to maybe 16. The Jonas Brothers were huge but if you don’t put out good songs, there’s no career. The songs are the most important thing in any band’s career. No matter what you are doing, no matter what you look like, you’ve got to have great songs.

BEAU: Is there any subject matter that is too taboo for Steel Panther?
STIX: No.
BEAU: Yeah, I was thinking not.
STIX: Everything is fair game.

BEAU: Will there ever be a time when Steel Panther says, “Fuck this pussy and drugs shit. We need a Grammy!” and then record your career-defining concept album. You know, along the lines of all the great concept albums like Kiss’ MUSIC FROM “THE ELDER”?
STIX: I don’t think so. The Grammys are so funny. There’s such a big part of me that thinks it is shameful the way that they do it. It’s kinda gross that Jethro Tull won for Best Heavy Metal album over Metallica! But at the same time, if Steel Panther got nominated for a Grammy, I would be excited. I don’t know if I’d be excited because all my life I’ve known the Grammys to be a music awards show or if it would be cool to be recognized… even by the Grammys. I can’t watch the TV show – it’s just kind of gross. You know what I mean?
BEAU: I’ve worked in this business for 2/3rds of my life and I still can’t watch the Grammys. They don’t speak my language. If they did – and if this was a perfect world – LOWER THE BAR would be considered Heavy Metal’s equivalent to Beyonce’s LEMONADE!
STIX: Can you PLEASE put that above the article?