It has been eight years since Southern California-based Apex Manor released their last album. Eight years is a long time between albums. In that same span of time, The Beatles wrote and recorded their entire catalog (not to mention making movies and touring). Fleetwood Mac was able to knock out everything from their 1975 self-titled release to their 1982 album TANGO IN THE NIGHT in just under eight years. Popular children’s music band The Wiggles issued nine studio albums, toured the world, and filmed a TV series within their first eight years of their existence. Wait… did I just mention The Wiggles? Oh, dear.  Let’s circle back to Apex Manor and the eight-year stretch between albums…


Singer/songwriter Ross Flournoy brought Apex Manor to life in 2010. Recovering from the break-up of his previous band, The Broken West, Ross began writing and recording music for a new project with the help of former bandmate Brian Whelan. By early 2011, Apex Manor had released their debut album, THE YEAR OF MAGICAL DRINKING, and things were moving full-speed ahead. And then, just like that, the band’s forward trajectory was derailed. Suffering from depression and alcohol abuse, Ross left California and checked himself into rehab in Memphis at the same facility that had treated his father. Over the course of the next few years, Ross managed to overcome many of his demons, work alongside his dad, and find new inspiration in his new life. He continued to write music for films and advertisements but didn’t revisit Apex Manor until he was fully committed.

HEARTBREAK CITY is Ross’ return to Apex Manor and it sounds like he’s all moved in and more comfortable than before. This is not to say that he is resting on his laurels, though. HEARTBREAK CITY is an amped-up collection of melodic Rock that is powerful on many levels. From the sonic blasts emanating from his guitars to the thoughtful yet apprehensive vocal delivery, this is an album that is filled with emotion. When not surrounded by a wall of guitars (“Diamond On The Dark,” “Sarah Now,” “Sanctuary”), Ross sounds vulnerable but hopeful. When he turns the amps to 11, his mission is not to decimate but to disarm the listener (“Asked And Answered,” “Where My Mind Goes,” “Heartbreak City”). A handful of tracks on the album fall somewhere in between the power and the passion, yet are just as riveting. HEARTBREAK CITY is an album that was well worth the wait. If Ross decides to sit it out for another eight years, we should see a new Apex Manor album by 2027. I sure hope we don’t have to wait that long. 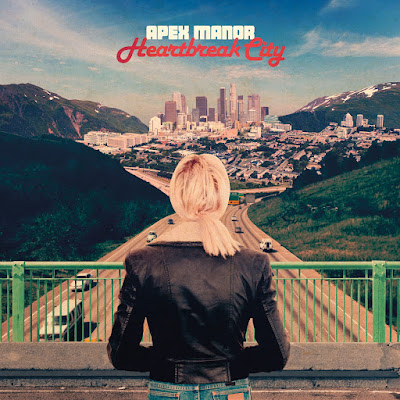